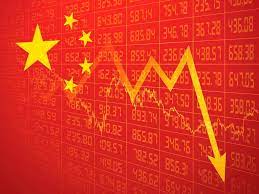 For an average Chinese citizen, the New York Times reports that around 70% of household wealth in China is real estate, and this means that Real Estate is the most important investment for Chinese people.

Evergrande, one of China’s largest Real Estate developers owns more than 1300 projects in more than 280 cities across China. Evergrande failed to meet interest payments to international investors and caused them to be declared in default while ballooning their debt to over $300 billion.

How bad is it?

China was building five times as many houses as America and Europe combined. Even with this much units being built, there was still seemingly a huge housing shortage, so much that some cities use a lottery system to allocate the units to buyers with odds as low as 1 in 60.

Massive protests in Zhengzhou, Henan in China were held by depositors who were demanding for their life savings back, as China froze millions of dollars worth of deposits since April. Why?

Allegedly, real estate developers are taking presales as down payments for new projects, for more presales and more projects while using new funds to slowly complete construction of past projects. This has caused several projects to be incomplete, or worse, abandoned by the developers due to the lack of funds.

Buyers have staged a major boycott stating that they will stop paying unless construction resumes. Although this started with property developer Evergrande, other developers are also facing similar protests with as much as 320 projects in 100 cities in China.

As much as 400,000 customers across China were unable to access their savings at rural banks in Henan and Anhui according to Sanlian Lifeweek. (China-owned magazine)

The problem lies in the simple fact that there is a decline in units sold in China while developers borrowed more money to keep their projects going.

What is the CCP doing?

China claims that they have tightened use of property funds by developers, and are making sure that the new units are delivered on time.

96% of the Chinese population is exposed to the real estate market, and 13 million units’ constructions have been halted last year.

The spillover effect of the developers’ inability to complete their projects while growing their debts caused banks to be affected, for they too, are lenders of the real estate developers’ projects.

Reports claim that some developers have been taking money needed to finish the housing projects out of the country, which adds fuel to the fire.

This may not be enough to avoid a bank run – if everyone tries to withdraw their money but bank only keeps 10% (fractional reserve banking requirement) and the rest is lent out, then there will be a major problem.

Worse, the 10% fractional reserve banking requirement has been lowered by China since 2019 to temporarily avoid economic slowdown, according to Reuters.

The Chinese government is weighing their options to solve these problems.

Will there be a bailout?

The solution on how China will solve this problem lies in bringing back trust in the government, the banking sector, and the real estate sector to avoid public chaos and economic collapse.

A bailout means loaning more money to property developers in default in order to complete the projects.

How are we affected?

Philippines Imports from China was US$28.21 Billion in 2021, and while our debt to China amounts to $2,597,000,000, how their impending economic collapse will affect the Philippine Market is yet to show.

While the Philippines is dealing with its own problems of poverty, inflation and rising oil prices, the fear of a domestic economic collapse is at the back of people’s minds as world leaders like USA and China are facing their own financial crises brought about by the war and the pandemic.

Still, Filipinos have to believe in the resiliency of their own real estate market for the outlook is optimistic according to research firms in the Philippines.